Skip to content
You are here:Homedribbble The Evolution of Web Design | Part 1: The 1990s


Founder of the Favourite Website Awards and author of Web Design. The Evolution of the Digital World. 1990-Today, Rob Ford, joins us today to share a brief timeline of web design’s evolution in the 1990s. Stay tuned for Part 2 and Part 3 in the series later this year!

The wheel has to be the greatest invention of all time. The Industrial Revolution marks a time when inventions of the era touched almost every person and every household.

The web is the biggest thing to happen since The Industrial Revolution and, possibly, since the invention of the wheel.

This was the moment planet Earth became the closest knit community of its lifetime.

In my book, Web Design. The Evolution of the Digital World. 1990-Today I cover three decades of evolution of web design, from day one of the web to the current day and highlight the pioneering examples of work that have brought us to where we are now. In this article, I’ll briefly run through a timeline of web design’s evolution throughout the 1990s.

At the end of 1990, Tim Berners-Lee had the first web browser/editor and web server (info.cern.ch) up and running on a NeXT computer at CERN, the European Organisation for Nuclear Research. The following year, in August 1991, he announced the WWW software on internet news groups and this was the moment planet Earth became the closest knit community of its lifetime. 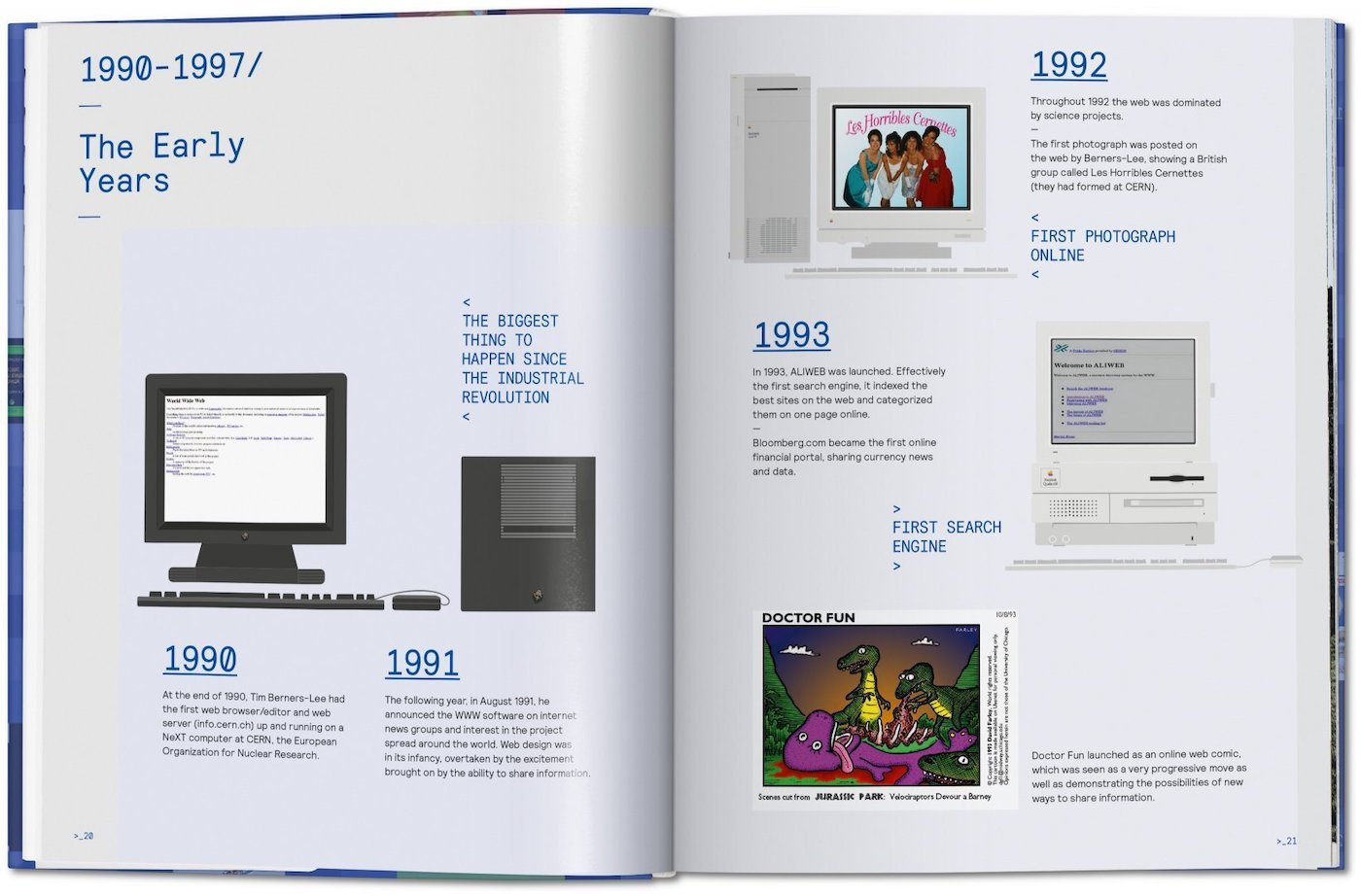 Web design in the very early 1990s was all about sharing information and websites were often pure text, with blue hyperlinks that turned purple on click (something Google search still shows us).

1993 continued to be a progressive year with the launch of The Internet Movie Database (IMDb) as well us the Internet Underground Music Archive which used the MP2 format to give exposure to unsigned musical acts and musicians.

SITO became the first online collaborative art project and MTV’s website began as an unofficial site. It was also the year of the first webcam, which was a camera pointed at a coffee pot at the University of Cambridge (UK), which allowed workers to see if there was any coffee available at any time.

By the end of 1993 Wired.com had also launched and there was a total of less than… 650 websites online!

In 1994 we got to see the very early stages of community showcase sites that were forerunners to the likes of Dribbble. For example, a project called Art.net showcased artists in San Francisco. Even at such an early stage of the web, with such a tiny amount of websites online, it was already clear to see how communities would become such a big and powerful resource and how important it would and will always be to have places to showcase great work. These communities have always brought all walks of life together from all over the globe in ways that could never have possibly happened before.

1994 would give us the early and first chatrooms, and also the first chance to order pizza online.

It’s easy to take Dribbble, for example, for granted, as a way to share and showcase work. But just imagine a time, pre 1990 and the web, when to reach a global audience with any type of graphical work or any work in general, you would need to be an internationally famous person—and even then, global publications were few and far between with most huge outlets, such as newspapers and television, still focused on things at local and national levels. The web blew off those chains of constraint immediately, and with a unique (or any) talent, one could reach the entire world within seconds.

1994 would give us the early and first chatrooms, and also the first chance to order pizza online. Pizza Hut gave the locals of Santa Cruz, California, this unique opportunity at a time when less than 0.5% of the population used the internet. That was an incredibly progressive move at the time. I’d love to hear from someone who actually bought pizza online in 1994!

1995 became known as the start of the dot-com boom in a year that saw the launch of Amazon.com which offered over one million titles. It was also a time that saw the launch of javascript and java, where the latter gave rise to some very interesting visual web design opportunities with lake applets. This essentially gave images a shimmering appearance, much like that of a lake in a steady breeze.

Windows 95 also launched, and this really opened the door to every non-programming person on the planet as its predecessor, Windows MS Dos, required a developer’s/coder’s mind and ability. Windows 95 was all about visuals and point and click. This entry-level enabled people, like myself, to hit the ground running with the web, web design, and all things internet.

From the <650 websites of 1993 we were now up to around 30,000 websites by 1995.
By 1996, we were seeing a rise in animated gifs and free webspace at places like Geocities. Space Jam would become one of the early pioneers and trailblazing sites that gave web design a giant leap forward with its new and unconventional interface. 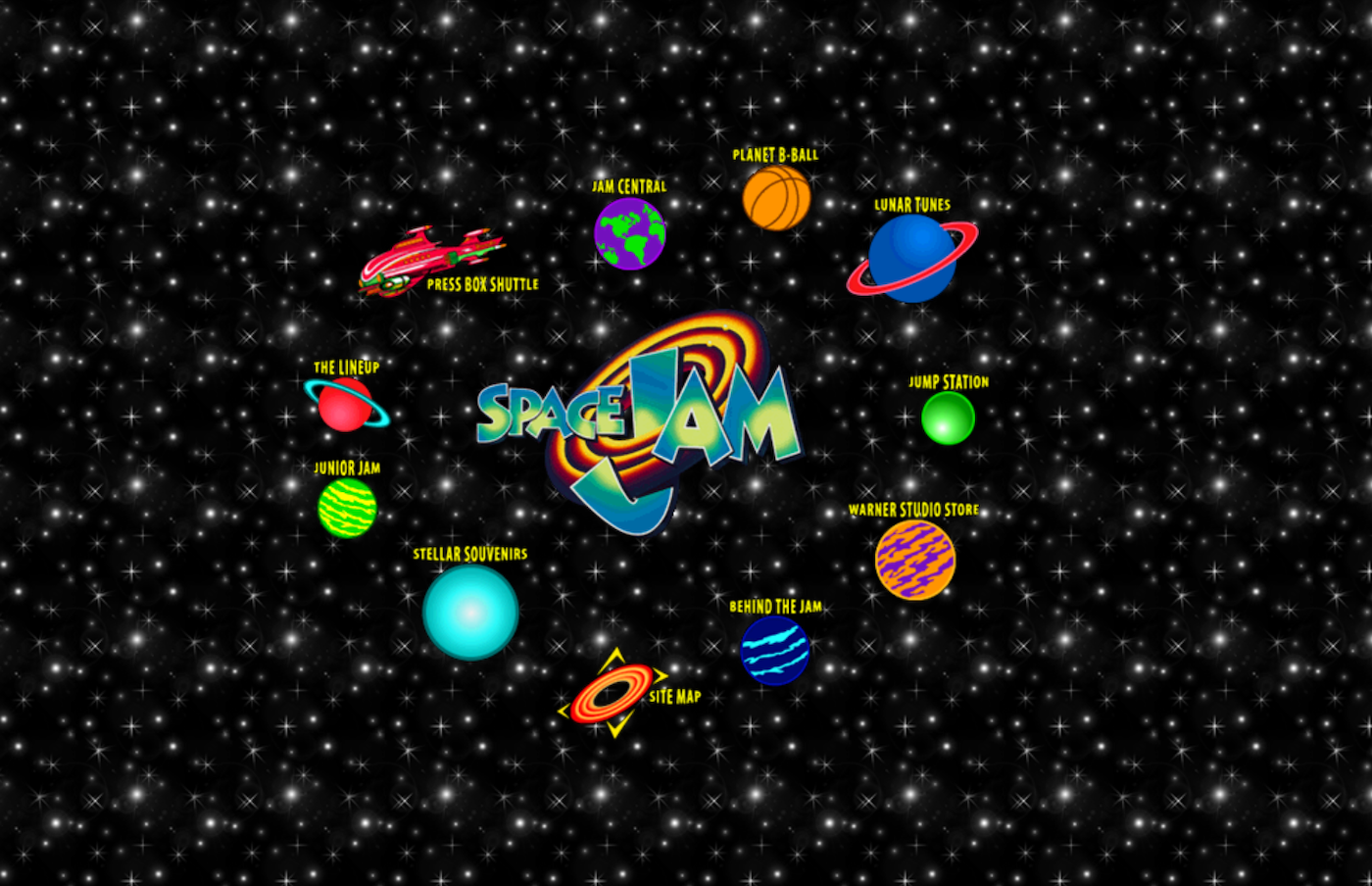 It was at this time as well that the web was about to be given a magic potion — FutureSplash (FutureSplash).

This new, vector-based tool garnered the attention of huge brands and adorned websites like Microsoft’s MSN channel and Disney too. This brought the software to the attention of Macromedia, and ultimately an acquisition.

Macromedia Director software was published via the shockwave player online. These early progressive web examples were very quickly leapfrogged by new and upcoming Flash projects, and it was around this time that we saw an explosion of creativity online. A new community of “Flashers” formed and a period of wild west web design began where there were no rules, no boundaries, and certainly no cookie policies!

Nobody knew what they were doing — it was like the first-ever wave of cave artists, with a blank canvas and some tools to leave their marks.

We saw what seemed like every person in the world becoming a “webmaster” and launching themselves as their own company or brand, with mine being treecity.co.uk. Nobody knew what they were doing — it was like the first-ever wave of cave artists, with a blank canvas and some tools to leave their marks.

By 1997, we were seeing the first Flash intros appearing on websites and a number of individuals started to really show a direction for web design via their own styles — Gabo Mendoza being one of the first with his website Gabocorp.com which became a legendary site in its own right, and one that truly started and influenced the careers of a generation.

As Gabo said himself, he had no idea that he shouldn’t use Flash for an entire website, or use every color he liked, or even add a site intro. After all, computer games had intros to them so why not websites?! 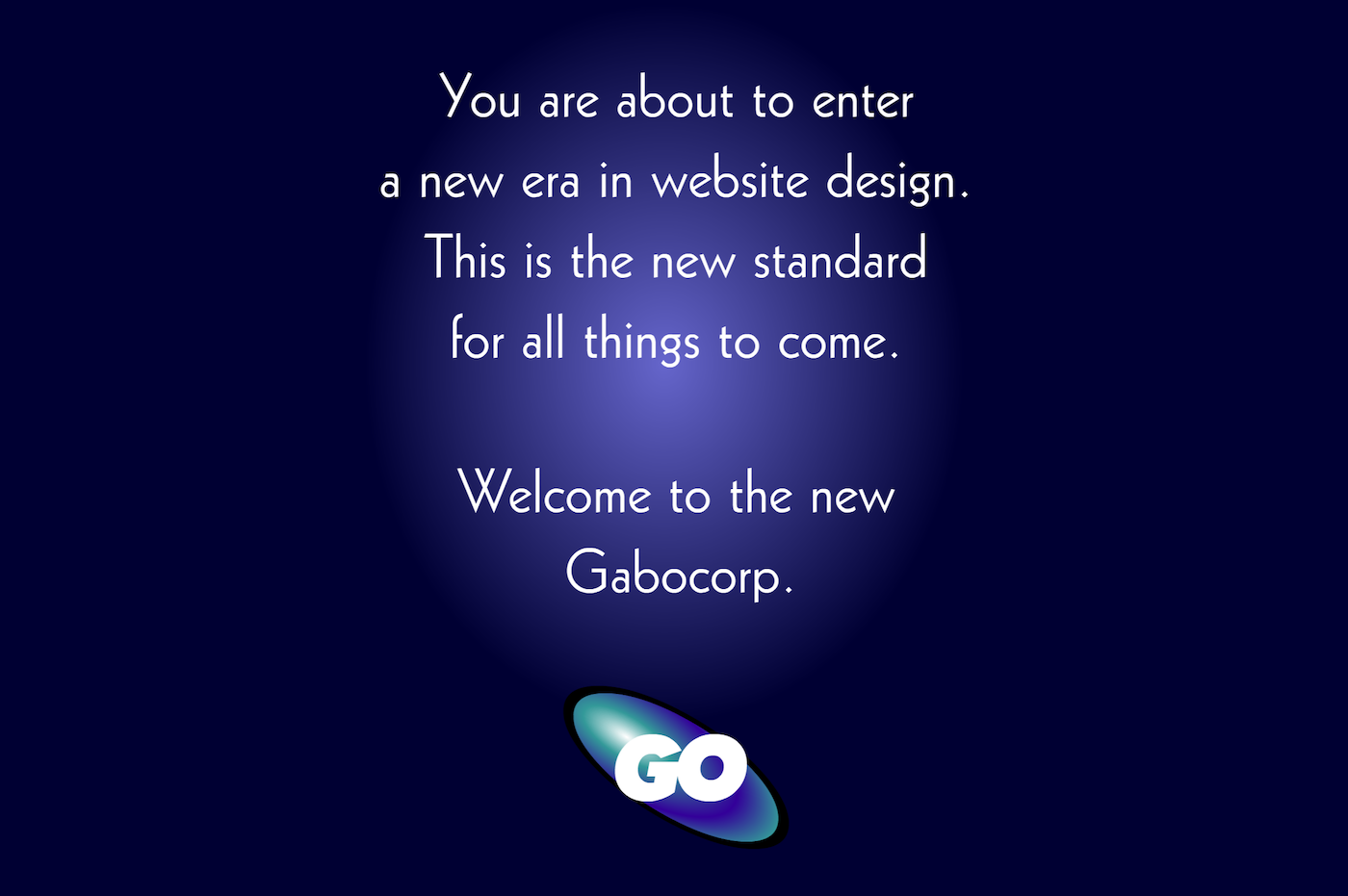 In 1998, with the launch of Flash 3, a Cambrian Explosion of creativity happened. Macromedia.com became a serious daily online destination for those seeking fame and inspiration, with their Shocked Site of the Day and later Macromedia Site of the Day. Over time, credibility over the quality of winners would see the demise of that showcase destination and the likes of the Flash Challenge and FWA would take over the baton.

Eye4U became a global phenomenon, with its mainstream reach and appeal, its bright colors, uplifting music, and dynamic Flash intro. It would take full advantage of the vector-based Flash software and would resize and look the same on every screen resolution available. In fact, this was responsive web design, over 15 years before the term was first coined. You can still see many of these 20+ year old Flash vector websites if you’re brave enough to have Flash still working in your browser. You’ll see how they still resize perfectly to today’s huge screen resolutions — even on your smartphone if you have a browser such as Puffin installed. 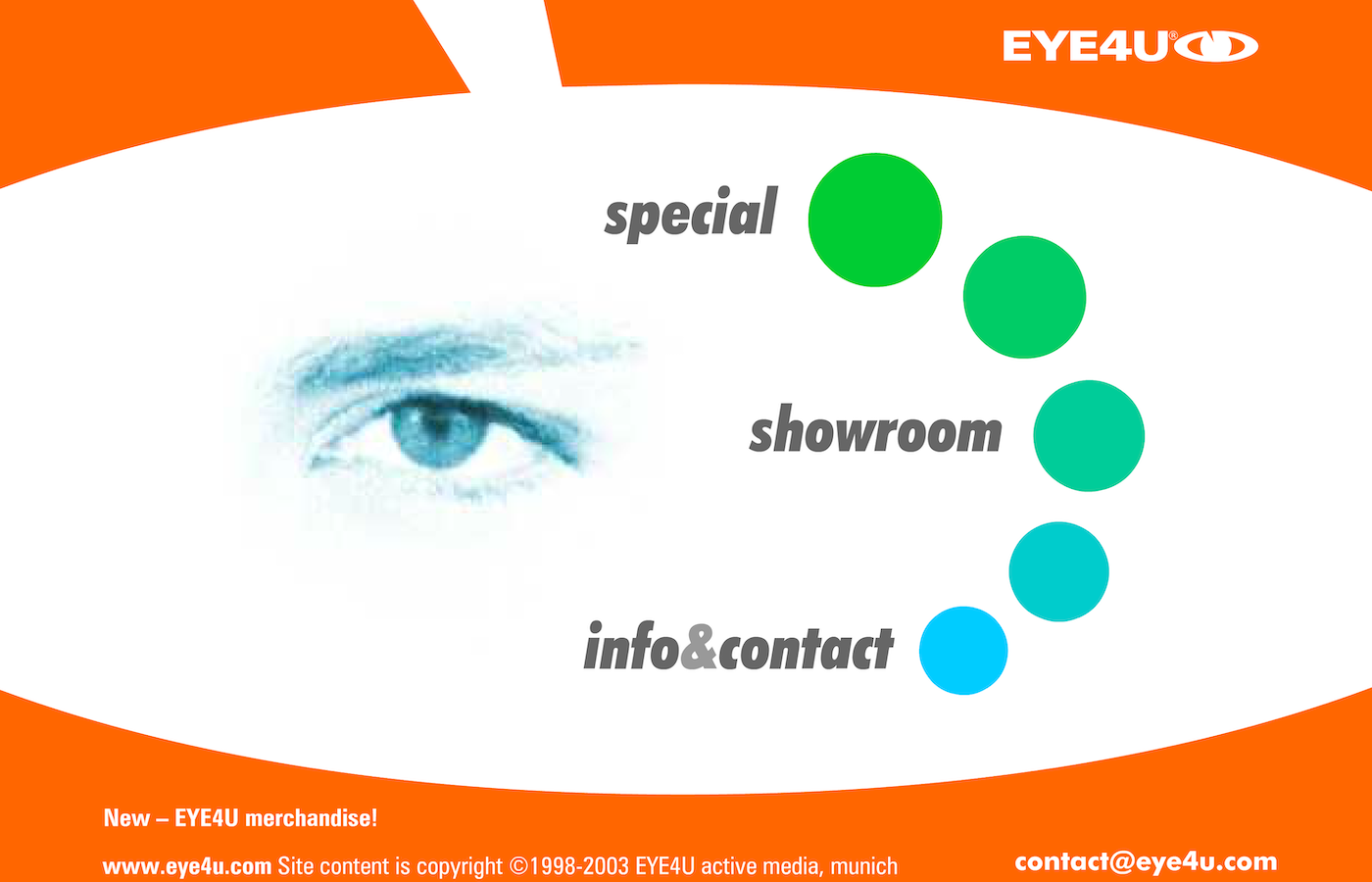 The likes of Balthaser would take Flash intros mainstream and begin the sharp divide of Flash lovers and haters.

The new community spirit gained force and individuals like Joshua Davis would become a pioneer of web art and open-source code with his Praystation website, which was an ongoing sandbox where he’d post his daily explorations of code and share them freely.

By 1999, we now had over 3.17 million websites online and people from all over the globe were influencing the direction of web design without any intention… just a pure desire to experiment and share. Japan’s Yugo Nakamura was a perfect example with his MONO*crafts website that pioneered and inspired on so many levels.

We’d also see in 1999, the first example of a drag-and-drop navigation. This is something that would many years later become the norm for many e-commerce shopping experiences.

The 1990s showed us how there was no true vision, other than wanting to explore and share without knowing how or what your work could become in someone else’s hands. It was a time of freedom where the only limitation was your own imagination.

About the author:
Rob Ford founded the Favourite Website Awards (FWA) in 2000, a recognition program for cutting-edge web design. He is a pioneer of Internet awards and has been featured in the Chicago Tribune, Guardian, and various web-related magazines. He wrote a regular column in Adobe’s flagship newsletter for seven years. He is also a champion of mental health awareness in the digital industry. Keep up with the FWA on Twitter.

Find more Community stories on our blog Courtside.
Have a suggestion? Contact stories@dribbble.com.